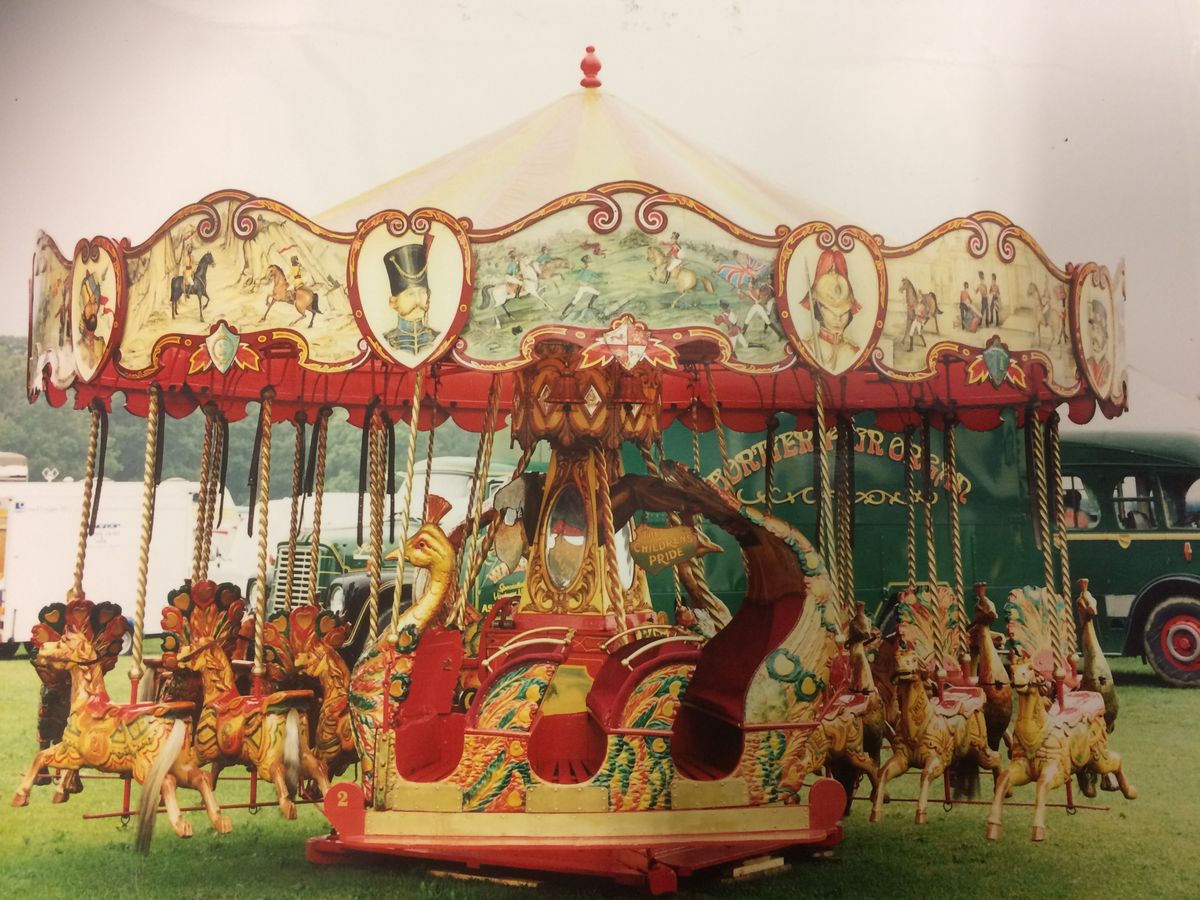 The golden years of fairgrounds in the UK, pretty much the Victorian era really. Saw numerous home grown companies providing the ever expanding scene with rides and shows that were works of art. Sadly like much of British industry, few ride manufacturers still remain. The legendary names of old seem to limp along in various forms until about the last third of the 20th century before finally fading away. Orton, Sons and Spooner Ltd was one such name, responsible for some of the most ornate switchbacks, arks and shows ever to appear on the fairground, they ended as equipment handling manufacturers before ceasing to trade around 1977.

Originally they were two separate companies. The first being the Lion Carriage Works. Set up by George Orton who manufactured gypsy wagons as well as drays and carriages for other industries. Based in Burton upon Trent, he received his first commision for a Showman’s wagon around 1883. At that period in history, showmen not only lived in their wagons, but they tended to be highly carved and ornate and formed the front part of a travelling show.

A young man named Charles Spooner, owner of the ‘Swan Works’, in Burton was one of Orton’s suppliers. A wood carver who had been apprenticed to Walter Gifford Hilton he supplied drays and carts to the thriving brewing industry in Burton.

Orton contracted him to provide carvings for his showfronts and wagons. This symbiotic relationship flourished to the point that the two companies were amalgamated in 1925 as Orton, Sons and Spooner Ltd.

They soon expanded their range into the full scale building of rides and showfronts and came to dominate the market. Their highly ornate, exquisitely decorated constructions were far in advance of the plainer, less impressive offerings from competitors, indeed the breathtaking scale of their offerings haven’t been matched since.

The picture above is a typical example taken from one of their scenic railways. Superbly detailed and robustly constructed, these cars were said to weigh around 1500kg’s each, with a complete ride in the 35-40 tonne bracket.

They built their first scenic for Holland Brothers in 1912, some 57 feet in diameter and powered by no fewer than eight electric motors. Over the next twenty years they completed over 30 of these rides.

The first World War, saw the company requisitioned to produce aircraft hangers, but successfully re launched into the fairground market in 1919 with another scenic railway.

Their final scenic was delivered in 1925, with the type coming to the end of its popularity. Smaller and lighter attractions now ruled the roost, with Noah’s Arks, Waltzers and Speedways being in demand. They also turned out an estimated 50 dodgem tracks, along with ghost trains, shows and side stalls. They built the first skid ride for the famous Midlands showman Pat Collins in 1928.

Sadly George Orton passed away at the age of 81 in 1924. The company now being in the hands of his sons, and Charles Spooner, who had married his daughter Anne.

From the onset the business employed only the best artisans and artists. The father and son teaming of Albert and Sid Howell being responsible for some of the stunning art gracing the fronts and rounding boards of these rides.

The Ben Hur front for Edwards ark was considered to be Sid Howells greatest work. The image above doesn’t do justice to the sheer size and scale of the work which was around 15ft high and over 40ft long.

Charles Spooner gained a reputation as being amongst the finest wood carvers in the business. Creating examples of pretty much everything required on rides at that time. The company was quick to respond to current affairs. Producing animals carved as Generals during the Boer war, and armoured cars and tanks during WWI.

They successfully transitioned from their early Rococo style creations, as the country moved into the Art Deco period. They produced modern, for the time, decor with curves and swooping forms. Decorated with modern airplanes and train engines, mixed in with bright colours and influences of the exotic from the far east and Egypt.

In common with much of industry, they gradually moved away from the one off hand crafted work. To a more standardised production line using stencils and patterned parts. To keep up with increased demand and competition this was a necessary evil. It did mean though that we would never again see the wonderful fronts and carvings for which they had become famous.

Charles Spooner died at the beginning of WWII. The bulk of the companies efforts being the manufacturing of military vehicles during the war.

They recommenced work in the fairground industry after the war. But it was a changed world, demand from the showmen was dropping off, and they began to diversify into other engineering work. 1954 marked the final break with fairground manufacture, and the company soldiered on until finally falling into receivership in 1977.

Orton, Sons and Spooner Ltd will be remembered as one of the greats of the last century.