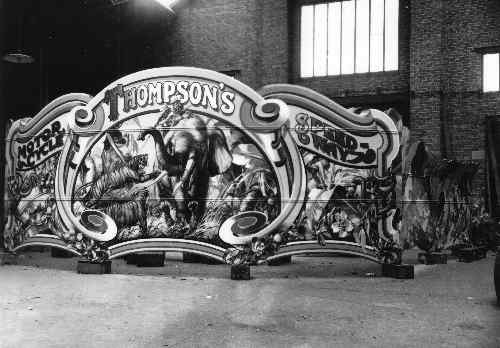 Another in our series of portraits on the great fairground artists. Sid Howell, and indeed his father Albert, were two highly regarded painters at the firm of Orton Sons, & Spooner. Or more commonly Orton & Spooner as it was referred to within the funfair industry.

The company produced some of the most ornate and elaborate rides, stalls and showfronts during the early part of the 20th Century. Indeed little since has come close to matching their style, both the early rococo theme or the later Art Deco. They were well known for employing the best of artisans and artists to work on their rides.

Sid Howell was born in 1906 in Bristol, but moved with the family to Burton On Trent, the homebase of Orton and Spooner. He not only studied art at school, but was helped with additional coaching from his father, and received actual working experience at the firm.

By the time he was 18, he had completed a study course at Burton Art School, and eventually qualified to teach the subject.

Many would assume that he would follow his father in to the amusement ride firm, but he chose a different path, instead accepting a position as trainee draughtsman at Branston Artificial Silk. Sadly this didn’t work out as the company folded three years later.

When Sid found himself unemployed in a period where jobs were scarce, he ended up joining his father Albert decorating funfair attractions. He brought the benefits of a new younger generation to the company. His knowledge of new techniques and his introduction of newer styles was evident in the standard of work being turned out.

The father and son team were a perfect match, especially on the many jungle scenes they painted together.

They were interrupted during the war years, as were most ride manufacturers. But happily by 1946 the company was back producing rides.

Robert Edwards owned a Noah’s Ark that had been built in the mid 30’s. He placed an order for the ride to be rebuilt.

The rounding boards were painted in the familiar jungle theme, quite probably by Albert. Sid however designed and painted a scene from Ben Hur on the main front panels. At over 40ft wide and 15ft tall it was a stunning work of art. This was widely recognised as the finest work of his career. Keep in mind that the front not only had to look right at ground level, but also when it was placed in the air. Add in the fact that the front was curved, and you have an idea of the level of skill involved in his creation.

Much of the fabulous artwork from these early artists has been lost, either when the rides were retired and scrapped, or when, as often happened they were repainted to keep them fresh.

Happily the Ben Hur ark survived. It is now a resident at the Dingles Heritage Museum in West Devon. Well worth a trip out to see.

Sid eventually left Orton & Spooner as work from the showmen gradually dried up. The company turned away from the industry .

Sid had a spell undertaking freelance work, and worked at an amusement park, and also Blackpool’s famous illuminations.

He died in 1966, but the immensity of his talent lives on in his finest work.

His son, Alan S. Howell, researched and wrote a book about the artists of Orton & Spooner titled ‘Men At Work‘. This is fetching sums in excess of £100 for a paperback copy. It would be well worth a read if you can get your hands on one.