Another in a long line of distinguished British Marquees, that are now sadly defunct. Foden trucks was a major British heavy goods vehicle builder for almost 120 years, and a major presence on the British funfair scene.

Edwin Foden started out apprenticed to Plant & Hancock, a maker of agricultural equipment. Leaving for a spell at Crewe Railway Works he returned to Plant & Hancock at the age of 19, eventually becoming a partner in the business. On the retirement of its proprietor George Hancock in 1887 the company name was changed to Edwin Foden Sons & Co. Ltd. Initially building industrial engines, small steam engines and traction engines.

The firm moved from traction engines into Steam Lorries when restrictions governing road transport were eased in 1896 which allowed speeds over 12mph, and removed the requirements for a man to walk in front of the vehicle with a red flag.

By 1930, Edwin’s son, E.R. Foden left the company after a disagreement over the future direction of road transport, he feeling that the future lay in Diesel engined lorries. He founded the rival firm of ERF, (his initials) another firm favourite on British fairgrounds and subject of an additional article at a future time.

Foden eventually realised he had been right thereafter rapidly switching to diesel production with the launch of the Foden F1.

By 1948 Foden were producing a range of vehicles including buses. Launching their own 2 stroke diesel engine which powered many of their heavy models. They also began offering Gardner diesel engines as an option.

By 1958 glass reinforced plastic cabs were introduced, leading to the first mass produced tilting cab in 1962.

It was this combination of rugged construction, Gardner Diesel engine and rot proof cab which led to the Foden range becoming a major force on British fairgrounds. Most vehicles used in the industry were purchased used, and the cab being rust proof was a major plus point. This, along with the Gardner engine which had a legendary reputation for reliability, and the tough build quality was a perfect combination for vehicles expected to have a hard life on the funfair circuit.

One of the most popular of the early Foden’s was the Micky Mouse Cab. So called due to its resemblance to the cartoon character.

Eventually with the downturn in the truck market, and economic woes in general, Foden fell into receivership in 1980. Subsequently being bought by the huge American firm Paccar, who manufactured amongst others, Kenworth and Peterbilt.

After Paccar took over Leyland trucks in 1998, Foden use of the GRP cabs was stopped. Being switched to the steel cabs used on Paccar’s other European marquee, DAF. Which were being produced by Leyland for DAF.

Sadly the Alpha was to be Foden’s swansong. In 2005 Paccar announced that production was to cease. Ostensibly to allow the Leyland factory to concentrate on increasing DAF production. The final vehicle to roll off the production line being an 8 wheeler. Which was delivered to the British Commercial Vehicle Museum

Our Trio Of Foden’s

The trio of Foden’s we operated while still attending traditional funfairs.

Like many ride builders, Wisdom can trace it’s history back to being operators rather than builders. R.T. Dowis, the Great Grandfather of the current generation of the family originally purchased a ride to travel the carnival circuit in Colorado, Nebraska and the other Plains states, all by rail at the time. In an interview his Gt Granddaughter laughed when she said I would have loved to have seen his wife’s face when he walked in and said ‘Guess what I just bought honey!”

Jerry Wisdom married Elaine Osborn, the founders granddaughter, giving up the chance to play professional football (Not what we and the rest of the world call football, but that strange American game where they use their hands more than their feet). Jerry being a handy engineer, was interested in the workings of the rides the family were travelling.

During some down time he stripped the ferris wheel down, redesigned it and created something that folded rather than disassembled. This resulted in the set up time going from five to six hours for five men, to around an hour and a half for two to three men. A massive saving when help is becoming scarcer.

Jerry took over the family carnival business in 1963 and set about updating and modernising the rides. A big part of this was trailer mounting making them easier and quicker to set up and tear down.

By 1969, manufacturing and mounting rides on trailers had become a bigger part of the business. Leading to the carnival side being sold off to concentrate on the manufacturing side of things.

From A Scrambler To A Sizzler

It was 1970 when things took off for Wisdom. They had bought the rights to a ride called the Scrambler, what we tend to call a twist. They redesigned it and produced a new version known as the Sizzler. Which was a major hit on the carnival circuit.

This successful ride helped fund Wisdom’s expansion into a catalogue of around 40 different attractions that they build today. One of their major claims to fame is that they have built more roller coaster type rides than any other company in the country. 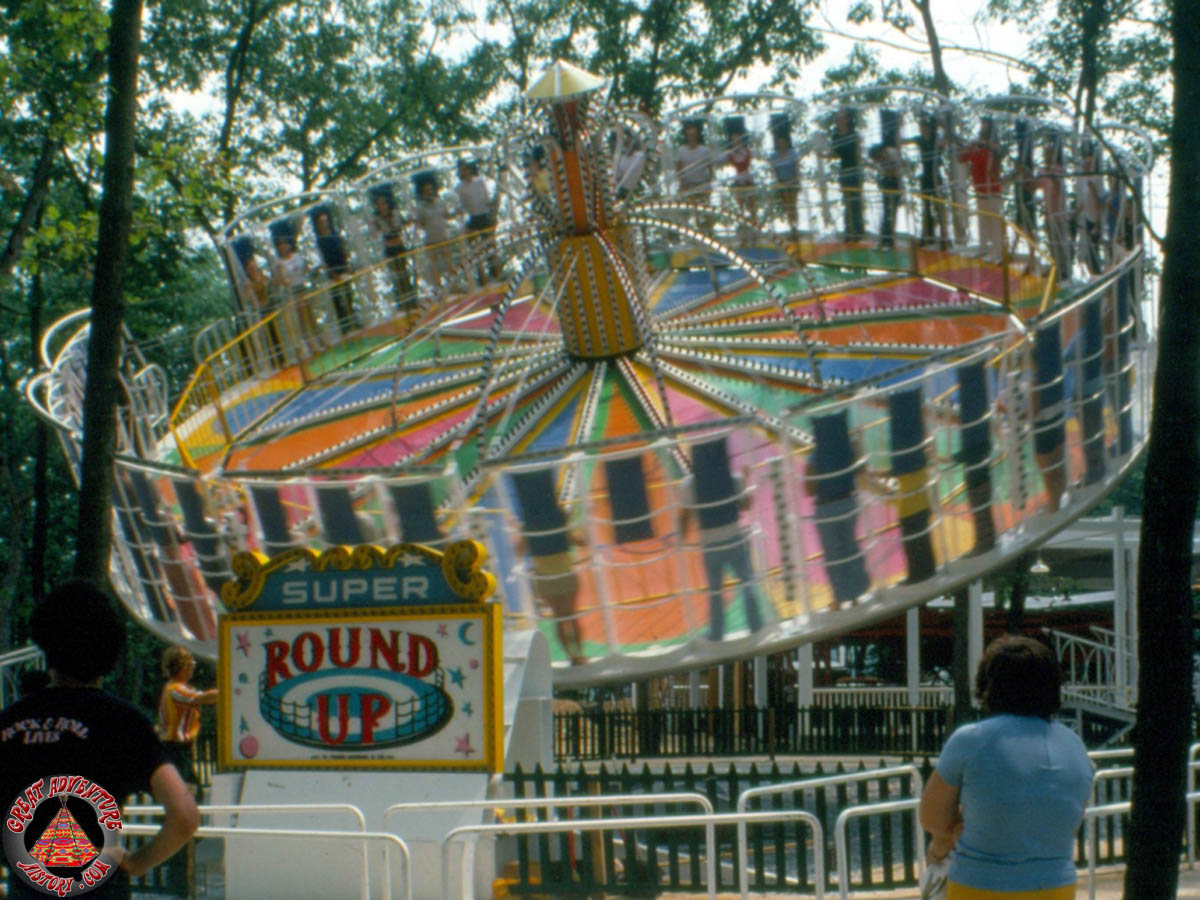 A resumption of our look at current and historic ride manufacturers in the funfair industry sees us looking at the now defunct company of Frank Hrubetz.

Dating from 1939 and at one time the second biggest ride builder in the U.S.A., the company finally closed its doors in 1992.

Frank Hrubetz originally worked at the Eyerly Aircraft Company, which was a well know manufacturer of aerial rides, based originally on a training device they designed for pilots. That company went on the develop the Loop a plane and roll a plane, two of its best selling designs which Hrubetz helped design.

In 1941 a partnership was formed with Earl 0. Bushnell to create Hrubetz and Bushnell. In addition to amusement rides they also manufactured heavily for the war effort during World War 2.

The main stay of the Hrubetz range were;

Paratrooper – Suspended seats with a canopy over the top to resemble parachutes.

Round Up – Also known as a meteorite in the UK, rides sit inside a cage which rotates at high speed sticking them the the mesh panels

Tip Top – A cross between a UK trabant and a waltzer ride, not really seen in the UK.

Fireball – Basically what we would call an octopus in the UK

Spitfire – Another oddball not seen over here. A weird cross between a paratrooper and a dive bomber.

The Hrubetz era came to and end, when Frank Hrubetz retires and sold his business to his son-in-law who renamed it Kilinski Manufacturing Company. This eventually became ManCo, then Datron Industries Inc.

In 2009 Battech Enterprises purchased the assets of Datron and continue to service some of the Hrubetz range in the present day.